Miracles in our Midst

The poor you will always have with you and you can help them any time you want. But you will not always have me.  Mark 14:7

I know, I wrote a blog about this passage a week ago.    But this part of the story of the woman who broke the alabaster jar speaks to my heart today.

I remembered it when I was praying.  Sometimes I can get overwhelmed with all of the needs when I am praying.  No matter how many prayers God answers, there are always a thousand things more that need to change.

But then I also remembered a conversation I had earlier in the week.  A sister was talking to me about my son’s upcoming marriage to a lovely young disciple.  “That is so encouraging to me,” she said.  “That is my dream for my sons when they grow up.”

And I didn’t know how to answer her.  Because I am super grateful.  But I’ve also been caught up in all of the issues my son and fiancee have had to go through in getting to the point of marriage.  Being a mom, I worry.  I’m afraid to hope.

So I lose sight of the miracle — that this marriage IS what I always wanted for my children.  I truly am receiving immeasurably more than all I could ask or imagine.

How many more miracles am I missing?  For many years we had no one, but now we have Mike and Marge here, a seasoned leadership couple with a passionate heart for God and others.

I can think of other small churches that don’t have leaders, or can only afford to partially pay the leader.

I have my health.  All I have to do is look on Facebook to see friends who are majorly struggling with health issues.

I’m alive. Today in the news is the shooting death of 14 people in San Bernardino.

It is so tragically sad.  They just went to a Christmas party, and they ended up dead.  It can happen to any one of us at any time.   I can think of many people who have gone on and are no longer with us.

A couple of days ago, I read last week’s blog to my writing group, and one of the women there was an atheist who is unfamiliar with the Bible.  “He sounds selfish,” she said about Jesus.  “It doesn’t sound good that he would say to not worry about the poor.”  To her, it seemed like all Jesus wanted was attention for himself, and didn’t care about the needs of others.

Of course she missed the point.  And that is that we will always be surrounded by needs, so when we have something in our life that is awesome, we need to savor it and celebrate it.

And that is what I need to do, myself.  I need to give God credit for the miracles in my life.  I need to be completely grateful for them.

My biggest problem is missing the miracles.  Either I take them for granted, or I get too caught up in life to even notice. Or I don’t recognize them because I’m afraid that they are too good to be true.

Let me break the alabaster jar in celebration and praise.  Let me kick up my heels, like we did last night at the church Christmas party.  (Here’s a picture of Bill living it up at the party.)

Let me revel at the epic wedding that’s coming in just a week!

We have all have been given wonders.  God is good.

When you have eaten and are satisfied, praise the Lord your God for the good land he has given you.  Be careful that you do not forget the Lord your God, failing to observe his commands, his laws and his decrees that I am giving you this day.  Otherwise, when you eat and are satisfied, when you build fine houses and settle down,  and when your herds and flocks grow large and your silver and gold increase and all you have is multiplied,  then your heart will become proud and you will forget the Lord your God, who brought you out of Egypt, out of the land of slavery.  Deut.  8:10-14

Miracles I’m Not Taking for Granted

I decided yesterday was one of the high points of my life.

First, out of the blue, my old friend Kristen Kopp showed up to worship with us at the North River Church service.  That was such an awesome surprise.  I hadn’t seen her in a long time.

Then, at church, we showed part of a video that I helped put together.

I can’t describe how gratified I was to finally see this video.  Over the past few years I’ve tried at least twice before to put together a promotional video for the church, and it always didn’t quite come together in the end.  Then we started working on this video, and Michael, the brother who filmed it, loaded the footage in his computer and then his computer broke in a car crash.  The video got put on hold.  And then when Michael did get his computer fixed, and had time to edit the video, we used too much copyrighted footage, and YouTube wouldn’t support it.  So I didn’t get to see it.

So this past Friday Michael uploaded the video to Google docs and I saw the video at last.  He did such an awesome job.  I teared up and my throat welled with emotion.  I thought, “This is something awesome that I was a part of, that I used my talents to help create.’  It was immensely gratifying. And it was even more special because for so long I’d felt sad and frustrated because I hadn’t been able to get a video done.  And then it was even more moving, because we were actually able to show at least part of the video to a large group of people.  We achieved our objective!

Another thing that made the day a high point was that we had a baptism that was an unbelievably good surprise for me.  It was Courtland, one of the Tuskegee students who has been studying the Bible.

With all the low points our church has been through in the last year, I can’t describe how encouraging it was to have this baptism at the North River service.  It was like a huge confirmation:  God is working!!

After church, our North River friends put on a wonderful lunch for us, and tons of people who have been involved in our ministry were there.  It was over-the-top encouraging.

And one person who was at the lunch was Ashley Nutt, a sister I LOVE who I helped study the Bible with, and is now at medical school in Philadelphia.

Ashley on the left. (Sorry my camera wasn’t set right and it’s blurry.)

It was great to see Ashley and hear her talk about how well she is doing.  But my heart soared as she related to me how wonderful our ministry is to her.  She said that no other ministry she’s been in has such a sense of family and dedication.  She was so passionate about the great spirit that defines our group that I felt lifted up and restored, again, because I felt like we’ve been through so much in the past year.

Finally, I went to the wedding shower for my son and his fiancee, Elizabeth.  It was one of the most lovely showers I have ever attended. 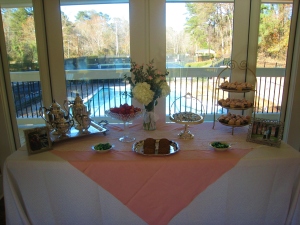 The women went over and above to make it an outstanding event.

But even more special to me, was to be able to celebrate at this tangible reminder that my son, Max actually is getting married to an awesome young woman.  I’ve talked before about how amazingly God has worked in Max’s life to bring him to this point.  So my heart was already full because of that.  But also, Max and Elizabeth have had some tough trials on the road to getting everything ready to have a marriage together, especially in the last week or so.  It was absolutely refreshing to be with loved ones and rejoice in all the good things they have.  God is good.

So, all in all, it was an incredible day.

But what made it incredible wasn’t just that awesome things happened.  It was that I very much recognized that each one of these things was a miracle.  Each occurrence could have gone a very different way.

And that recognition of miracles, after the struggles and lowliness of heart I’ve experienced, was especially poignant.

So the scripture in Mark for today is:

When you see ‘the abomination that causes desolation’ standing where it does not belong—let the reader understand—then let those who are in Judea flee to the mountains. Let no one on the housetop go down or enter the house to take anything out. Let no one in the field go back to get their cloak. How dreadful it will be in those days for pregnant women and nursing mothers! Pray that this will not take place in winter, because those will be days of distress unequaled from the beginning, when God created the world, until now—and never to be equaled again.

“If the Lord had not cut short those days, no one would survive. But for the sake of the elect, whom he has chosen, he has shortened them. At that time if anyone says to you, ‘Look, here is the Messiah!’ or, ‘Look, there he is!’ do not believe it. For false messiahs and false prophets will appear and perform signs and wonders to deceive, if possible, even the elect. So be on your guard; I have told you everything ahead of time.

“But in those days, following that distress, ‘the sun will be darkened,and the moon will not give its light; the stars will fall from the sky,and the heavenly bodies will be shaken.’

“At that time people will see the Son of Man coming in clouds with great power and glory. And he will send his angels and gather his elect from the four winds, from the ends of the earth to the ends of the heavens.”  Mark 13:14-26

It’s a long passage.  But Jesus was saying that grueling, frightening times were coming, but then at the end, Jesus will come back and, with great fanfare, and gather us and transport us to be with him in heaven.

None of us know how many struggles we’re going to have to go through before the end comes.  But there will be struggles.

That’s what makes the miracles that happen along the way especially awesome.

And my message today, is that we need to see the miracles that are happening, and not take them for granted.

Jeff Hickman preached yesterday that we should exult in the miracle of our salvation.  He quoted Titus 3:3-5a

At one time we too were foolish, disobedient, deceived and enslaved by all kinds of passions and pleasures. We lived in malice and envy, being hated and hating one another. But when the kindness and love of God our Savior appeared, he saved us, not because of righteous things we had done, but because of his mercy. . .

He pointed out that we CANNOT take our salvation for granted.  We would be in such a mess without it.

The same is true for our lives.  God gives us so many things, at just the right time, that are wonderful.

Let’s recognize these things.  The days are dark.  The very fact that so many things have gone right is a miracle!

And if you are at a low point, waiting and wishing for something you desperately need to turn out for the good, keep holding on and remembering what God has already done.  Something good is coming!

Today I am utterly thankful for the ways God has worked.  Life is a series of miracles.  I don’t take them for granted.